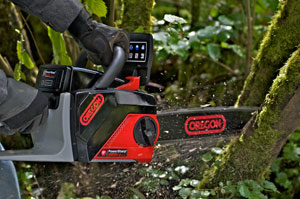 1. How long does the battery last?

An Endurance battery pack will last approximately 250 cuts per charge in 2 to 3 inch (5-7cm) diameter limbs. This performance may vary with user technique, chain sharpness, size and type of wood.

A Standard battery pack will last approximately 50% of an Endurance battery pack. Cuts per charge will drop significantly with increasing diameter of wood.

2. How long does the battery take to charge?

3. How many times can the battery be recharged?

Both Endurance and Standard battery packs use premium cell technology and will last for approximately 1000 charge / discharge cycles. 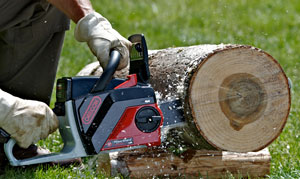 5. What is the difference between Endurance and Standard batteries?

An Endurance battery pack offers increased capacity as it has 20 individual lithium ion cells, while a Standard battery pack has 10 cells.

6. What is the difference between lithium ion and other batteries? 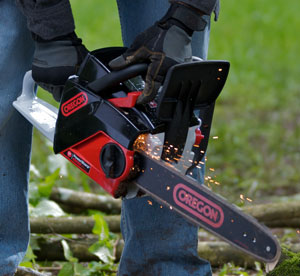 7. What is PowerSharp® (the red lever) and how does it work?

The chainsaw has a built-in chain sharpening system. When the chain is dull or not cutting fast enough: bring the chainsaw to full speed, simply pull the red lever for 3 to 5 seconds, and the chain will work like new. Depending on how much the chain was damaged prior to sharpening, expect approximately 10 to 20 resharpenings on an individual PowerSharp chain.

8. Can a non-PowerSharp® type chain be used on the saw?

9. Can I put a shorter or longer guide bar on the saw?

It is not recommended to install a guide bar longer than 14 inches (35 cm). The Oregon PowerNow cordless chainsaw has been designed with a 14 inch (35 cm) guide bar as the optimal length. Performance will decrease with a longer guide bar. Shorter guide bars with an A041 tail mount can be fitted to the chainsaw.